In order to further improve the ability of the group staff to assist, enhance the sense of responsibility and mission of the staff and enhance the communication and integration between the various departments of the branch companies, Super Group organized an activity at the Feng Tang Green Park located in Yongxing town on April 8, 2017. “Work together to pursue a brighter future” was regarded as the main theme of this activity. There were 6 missions in the activity.

The opening game was the " Breaking Egg" interactive game. There were 4 phrases of this game: eggs → chicks → roosters → Phoenixes. Two staff would in competition for being the phoenix. At the last, only three colleagues did not become phoenixes. Therefore, they got "small punishments ": they had to imitate the classic sketch lines of Song Dandan "We are cocks! And we are the cock fighters! Yeah" This warm-up game not only made everyone physically and mentally relaxed, but also helped colleagues become closer. One day of development training had a so exciting start! 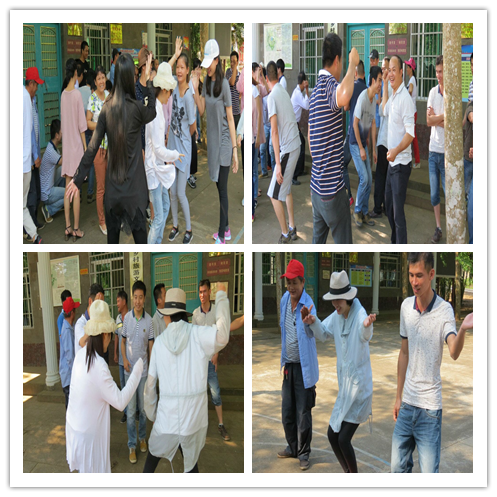 All people were divided into four teams in this activity: the Super,the Sun, the Phoenix and the Sailing. Four teams all had their own novel team flag, team song and slogan respectively.

From the organization of the new team to the election of team name, team song and slogan, everyone in the shortest possible time became familiar with the team members. This phenomenon indicated that the whole process could not be smooth without the collective wisdom and strength of the team! 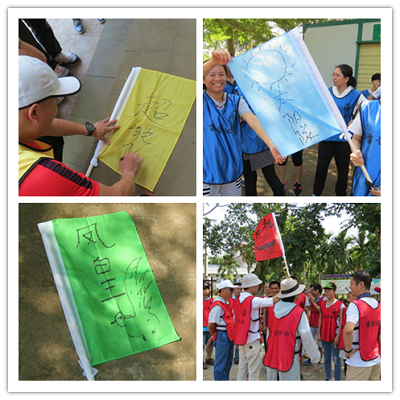 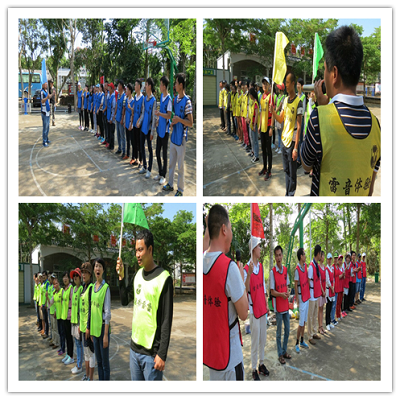 2, The Dynamic Ball
Members of those 4 teams juggled volleyball at the same time. The team who got the greatest sum total
of juggling was the winner in this game. The Super Team got the number of juggling for 135 at the end,
and accessed to the champion of this game! The Sailing Team got 94 and became the last one in juggling.
Therefore the activity instructor joked to the "Sailing" of the team’s name  which mean just a beginning
of a voyage.This game tested collaboration and unity of a team. Team members experienced the goal
management and time management. They hadlearnt a lesson that when facing changes,they needed to
adapt it and tried different methods to solve the problems in this situation.Actual practice was more
important than theoretical suggested sentences. This game also reflected that "No perfect individual, only perfect team." 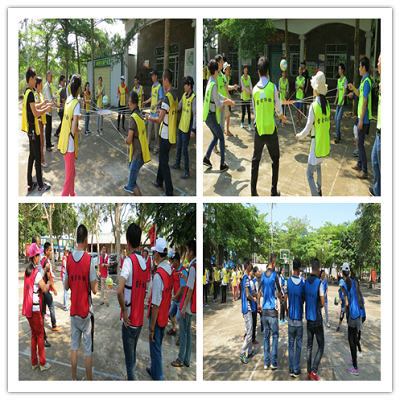 There were 30 cards representing 1-30 digital information. The missi-on of staff was to put those cards in  order just by their imagination. But the "market" had its own rules which required only one person  in a minute to get the card sort, while others were allowed to give   advice but no touching, otherwise the
game time would be shorten.Every team was desired to be the winner; therefore team members
inadvertently touched the cards and attributed to time wastage.  The Sailing team fouled out about 3 times
because one of the players inadvertently touched the  cards.  Coincidentally, the players of each team
involved in picking up the cards were all female. After the end of the game, each female player's nails
had appeared varying degrees of wear, which seemed that all of them were  forgotten into  the game. 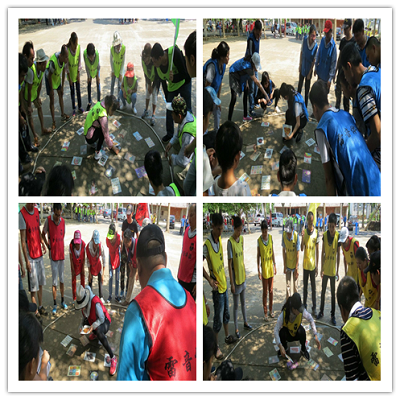 4, Morse Code
Every team sat into a row with the eyes covered. A set of digital codes could be passed on through team member physical contact but no voice making instead of. In the course of the game, each team came up
with a variety of methods, unfortunately, only the Phoenix team conveyed a set of correct digital code.
Through this game, it required the team to get ahead of the un-   expected situation and prepared solutions.
In this way, those problems would not lead to a  chaos. Everyone in the job had to ensure the message
received of which with correctness then continue to convey to the next person, avoiding the final message error. What’s important was that everyone should feedback timely during the works. 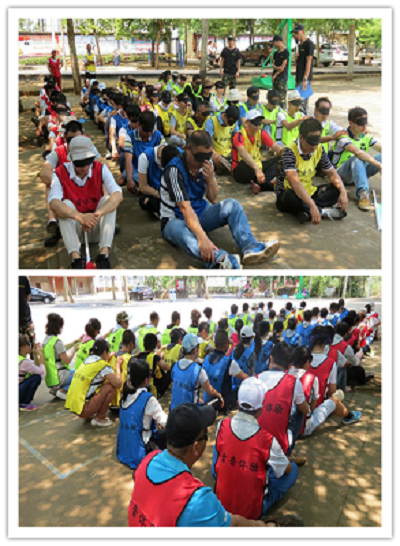 Two or three built a small team, and each team were distributed the  same amount of coins and cash.
Within the limited time, the team needed to operated with those money to  maximize benefits through
their wisdoms and ways."No rape is not business." It was a derogatory sentence but as long  as under
the premise that the members obeyed the rules, the use of  small groups of wisdom and tricky methods
had its role in this game. 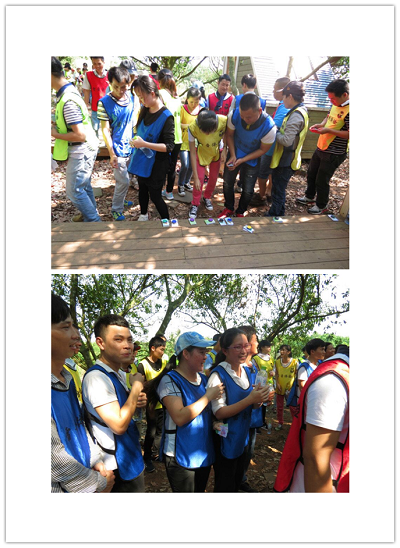 Members whose eyes were cover needed to passed through a rugged path in the support of the other member from their team. This game was to let  people  experienced  a confused, helpless, fear situation to figure
out what were the most  needed at that moment.  Do not claim that everything you have now is what you
deserve or others should  offer you. Did you cherish the kindness of others? Did you be thankful? Did you reciprocate for that?
This project told us that the courage to take on their own responsibili-ty, trust in teammates, trust yourself. "Trust" was the most critical factor in the completion of the project. If the "blind" did not trust  their partners,
then this project was destined to fail.  Of course, partners adopted correct methods, which was also the
success factor. When your eyes were covered, you had to trust in your partner completely although you
even did not know who he was, then you must convince of  that he would not abandon you and he had the
ability to accompany you walk through this short section wind and rain of life. In this process, these two
partners must be in understanding of the action in common and accept it. This was a tacit understanding
between partners. In a team, mutual trust must be formed between members and mutual aid had to be a
tacit understanding and awareness of all people. No  matter who was in the trouble, others were obliged
to give a hand to him. This kind of tacit was fostered through the usual work and guided by leaders. 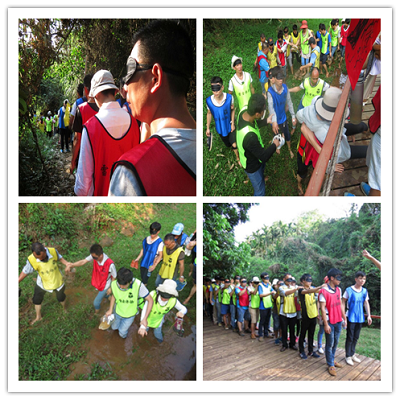 This activity was concluded in a tense, orderly, enjoyable and amusing atmosphere.This outdoor activity
wasn't only to enrich the spare time of employees, offer them a chance to tough their mind and beyond themselves as well as to smelt the team and assist for innovation. After every colleague tasted the joy of success brought by the teamwork through experienced the change,  dedication, assistance and courage, they had deeply apprehend-ed the essence of responsibility, assistance and confidence,furthermore,
they were aware that the responsibility of which being a team member should bear.Meanwhile,many funny and interesting things of colleagues were discovered in this expanding training activity, which

brought a closer relationship and further communication  between colleagues, it benefits!

Here we have gained the growth, friendship and thanksgiving, have learnt to trust, dedicate and be united.

Here we ceaselessly to become better, united, and excellent.
Our team has always been smelted,  undoubtedly, we will create a new brilliancy together in the future!

Most importantly, Hainan Super Group would offer the most  sincere appreciation for all of your supports! 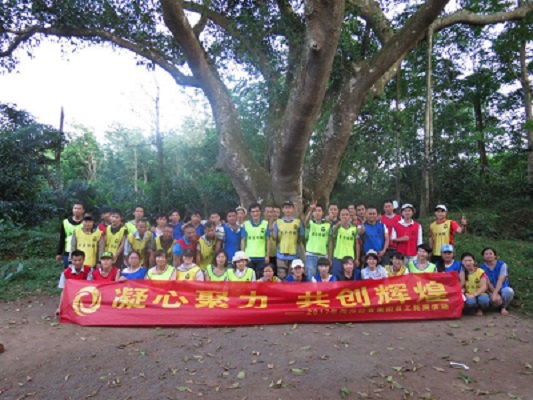